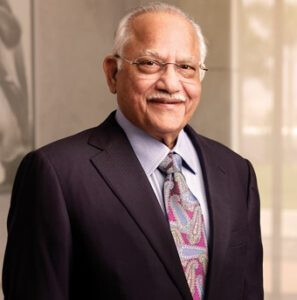 Dr. Reddy received his medical degree from Stanley Medical College in Chennai and later trained as a Cardiologist in the UK and USA. He did his Fellowship from the Massachusetts General Hospital, Boston and went on to head several research programs at the Missouri State Chest Hospital, USA where he worked for several years before returning to India in 1971, at the behest of his father.

This act of leading by example in reversing the brain drain eventually became an agenda with Apollo Hospitals, India’s first corporate hospital that heralded the country’s burgeoning private healthcare industry.

The dream of making world-class medical facilities and services available in India spurred him to set up the Apollo Hospitals in Chennai in 1983 at a time when private healthcare institutions were virtually unknown in the country. The new hospital attracted the best medical talent including eminent non-resident Indian doctors from hospitals in the US and UK

Starting from a 150-bed hospital in 1983, the Group has continuously excelled and maintained leadership in medical innovation, clinical services and cutting edge research. With a network of over 10,000 beds across 64 hospitals at culturally diverse locations in India and overseas, over 4000 top-class clinicians and employee strength of more than 65,000 professionals, the Apollo Hospitals Group is one of the largest hospital groups in the world, being consistently ranked amongst the best hospitals for advanced medical services. These hospitals have served over 42 million patients from 120 countries, with seven of them having the prestigious JCI accreditation.

Dr. Reddy’s pioneering success includes the initiation of a change towards preventive care by pushing for a new standard in assessing and diagnosing India’s health to fight the triple terrors of diabetes, heart diseases and cancer through preventive health checks. Telemedicine, as in the world’s first V-SAT enabled village, and health insurance like the Aragonda Re. 1/day scheme were other successful pilots.

His mantra has been to identify the needs of India, and fill the lacunae using a stretch of innovation, technology and commitment.

Dr. Reddy has undertaken pioneering work in bringing about institutional changes in the private healthcare infrastructure by establishing Apollo Institutes for post graduate Medical and Nursing Education, Hospital Administration, Physiotherapy, Clinical Research and a large number of Paramedical Programmes. With the setting up of the Apollo Telemedicine Networking Foundation, Health Super Hiway, Apollo Munich Insurance Co. and the Apollo Reach Hospitals, he helped establish a modern healthcare network through both in-house and outreach services, reaching out to millions of people.

As the Chairman of the CII National Healthcare Committee since 2006, Dr. Reddy constituted sub-committees for drawing up standards for accreditation of Indian Hospitals for the very first time in the country. Ever since, the committees have done commendable work in the areas of medical value travel and medical code of ethics. One of the areas of significant impact has been in the area of budget recommendations to the Government and development of Health Insurance.

As the Chairman of the CII Health Council since 2010, Dr. Reddy is Advisor to its committees on Healthcare, Health Insurance, Public Health and Pharma. As Chairman of the CII National Council on Public Health since 2011, with a view to supplementing Government’s efforts in the area of public health, Dr. Reddy is working on expanding their coverage through efficiency and quality interventions, by leveraging appropriate partnerships with the private sector as well as civil society institutions.

Dr. Reddy was awarded the Padma Bhushan in 1991 for his contribution to the emergence of the private healthcare sector and his role in bringing about several regulatory changes relating to licensing, import restrictions, organ transplantation, etc.

He received a number of awards and recognitions such as Mother St. Teresa’s ‘Citizen of the Year Award’, recognition in Harvard School publications for pioneering efforts in healthcare, ‘Life Time Achievement Award’ by Hospimedica International, the ‘Asia Pacific Bio Business Leadership Award’ by the University of Southern California, ‘Modern Medicare Excellence’ Award by the ICICI Group for outstanding achievements in the healthcare industry and numerous others.

The Government of India honoured the pioneering spirit of the Apollo Hospitals Group with the release of a commemorative postage stamp.

Dr. Prathap C Reddy was conferred with the second highest civilian award, the ‘Padma Vibhushan’ in March 2010. This unequalled commendation from the Government of India is an acknowledgement of his untiring pursuit of excellence in healthcare as Apollo strives towards touching a billion lives.

Under Dr. Reddy’s leadership, the Apollo Group has undertaken philanthropic work through ‘Save a Child’s Heart Initiative’ (SACHi), the CURE Foundation for cancer care, the Indian Head Injury Foundation (IHIF), ‘Distance Healthcare Advancement’ (DISHA), and many others that have touched the lives of several hundred thousand children, differently-abled people, cancer and brain trauma patients.

*All fields are mandatory.
Home sample collection charges will be applicable.